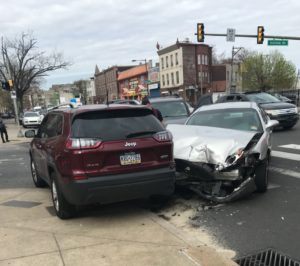 Far too many vehicle accidents in Philadelphia are caused by a driver who was not paying proper attention. Many of these accidents occur in intersections, whether rural or urban in nature. In some cases, another entity could even be held responsible for the accident if the intersection was designed or maintained poorly. In that case, the lawsuit filed might involve more than one liable party, such as a negligent driver or even a government entity.

Why Is An Intersection Accident So Common?

Within intersections, cars, pedestrians, buses, and bicyclists might all be approaching the same area at the same time.

Intersections are one of the most common places for vehicle accidents to occur because cars are traveling in various directions while attempting to cross or turn. There are many different factors that can contribute to the level of severity for damages and injuries in Philadelphia intersection accidents, including the angle at which these intersection crashes occur and the traveling speed of the cars at the time of the crash.

One of the most important aspects of proving liability in a Philadelphia intersection accident has to do with identifying the underlying cause of the crash.

Factors such as whether or not any traffic cameras were placed at the intersection could help to further explain what happened, but more often than not, it falls to accident reconstruction experts and the injured party's collection of evidence to show how an accident occurred. Intersection and T-bone accidents can leave behind devastating injuries and months or even years of recovery for someone who suffers.

What Are the Most Common Causes of an Intersection Accident in Philadelphia?

Aggressive driving maneuvers and distracted driving behaviors are most likely to contribute to a preventable intersection accident. These behaviors can include:

What Is the Connection Between a Philadelphia Intersection Accident and Speeding?

This is due to the fact that the faster vehicle is traveling, the higher the transfer of force between the speeding vehicle and your own vehicle, making it much more likely that as a crash victim in a Philadelphia intersection accident, you will sustain disabling or full body impact injuries. This is one of the leading reasons why Philadelphia intersection accidents are so dangerous. Aggressive and careless driving can involve unsafe lane changes, inappropriate passing maneuvers, or exceeding the speed limit.

An experienced Pennsylvania personal injury lawyer can assist you with the collection of proper evidence after your intersection crash. Evidence collected at or shortly after the scene of the incident can help to bolster your claim as an injury victim regarding the substantial nature of your injuries.

Evidence can include vehicle maintenance records, police reports, cellphone videos or photos of the scene, CCTV footage from area businesses, social media or cellphone records, witness statements, and blood alcohol and drug tests. Together, these pieces of evidence can show that another person might have caused the crash at an intersection and left you vulnerable to life-altering injuries.

Insurance plays an important role in the resolution of any intersection crash. Turning first to your own insurance carrier is key to filing a claim. However, your injuries might go beyond what’s covered for your injury protection insurance. Furthermore, you might have extensive emotional impacts and distress from the accident that can be difficult to incorporate into a claim or easily quantify.

If you have been seriously injured in a crash, you deserve to have your rights evaluated and explained to you by a dedicated Pennsylvania personal injury lawyer. A Philadelphia intersection accident has the potential to alter the course of your life for the foreseeable future and knowing how and when to protect your interests makes it imperative that you retain the services of an experienced attorney as soon as possible.